Like many Newcastle fans I was shocked and upset to hear about the passing of former Newcastle United goalkeeper Pavel Srnicek. Coming so soon after the death of, the seemingly indestructible, Lemmy from Motorhead it is difficult to escape the feeling that another great chunk of our collective history has been tinged with sadness.

Pav was clearly a handsome and charming gentleman who appreciated and reciprocated our love for him but that affection wouldn’t be so marked if he hadn’t been a bloody good goalkeeper.

I’ll leave the proper eulogies to those who knew him but this point is relevant: Jim Smith bought Pavel but Ossie Ardiles gave him his debut during a difficult period in our history. He replaced bonkers John Burridge at the end of the 90/91 season and started between the sticks in 91/92 by which time some people had seen enough. “Worst bloody goalkeeper we’ve ever had,” a large fellow growled to me in the Gallowgate toilets after Pavel had suffered a torrid first half against another team of 2nd Division cloggers intent on roughing him up with high crosses and late challenges. This wasn’t a one-off opinion, many fans and journalists didn’t rate him. 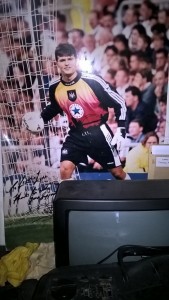 “He could turn out to be one of the best,” I said, ever the optimist.
My pre-match mob of degenerates had been talking about Srnicek in the pub, one of whom, Bront, used to be a goalkeeper. So I’m not claiming this insight for myself but Bront’s view had inspired my taking this bigger, drunker guy to task.
“You can’t learn quick reactions,” Bront had said, “and this kid has got really quick reactions and he’s got the build and the agility. You can learn when to come for crosses and how to dominate your penalty area.”
It took time but Bront turned out to be right. As Srnicek’s confidence improved so did his standing with the crowd and not just with whip crack hand speed and acrobatic saves. He took a, sometimes terrifying, glee in coming out of his area to audaciously skip past inrushing forwards with the ball.

Pavel Srnicek will be fondly remembered by Newcastle United fans but he should also be remembered as proof that you don’t have to be from Newcastle or even to be English to understand Newcastle United and to be welcomed into the tribe. Hopefully an additional legacy would be the lesson that sometimes a footballer needs to be given a bit of time and patience before being prematurely written off.

This entry was posted in General Waffle. Bookmark the permalink.